Google recently announced a change to its standard ad unit. This marks the third significant change affecting marketers of prescription products in the past year who are using Google.

At this point, I'm definitely seeing the need to revisit my article on using Google to market prescription products and even the presentation from last fall's FDLI Advertising and Promotion conference is now out of date. Over the next few months, I will be providing more on that.

In the meantime, here's the skinny on the update.

Google is fully embracing a mobile-first world view and is expanding the character count limitations for text ads.

The chart below (lifted from Google's public blog post) shows the breakdown between the current and the new formats. 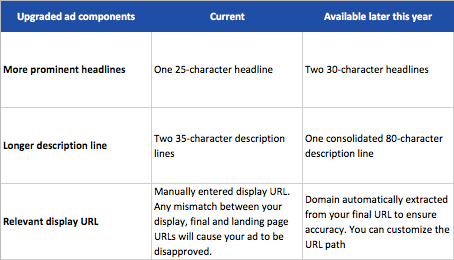 The primary benefit for marketers of prescription products is that it will be easier to meet their requirements for promoting drugs without a black box via a reminder ad and for black box drugs to fit all of the required elements for a reminder-like ad. This is most particularly relevant to fixed dose combination products. When the product being promoted has four or five active ingredients, it can very quickly be difficult to fix everything into the current character count limitations. Yet, failure to use the full established name remains on FDA's radar both in guidance and enforcement as a key regulatory requirement.

This change has far greater implications for prescription product marketers, as it is precisely the ability to have a difference between the destination and the display URL that enables marketers to make use of redirecting ads.

If the ads automatically extract the base URL from the destination URL, then the mismatch between display and destination URL that is essential to redirecting ads will no longer be possible. This would significantly limit prescription product marketers' options.

The biggest concern is for smaller, less well known brands. For those brands a reminder ad is not viable because very few people are already aware of their brand name; hence a reminder ad that doesn't describe the product's use has no value. But if the redirecting ads are eliminated, then such lesser known brands would have no way of attracting people who are looking for treatments. By assumption, these brands are not as well known which also means that their organic listings are not likely to be very high, so this would have a deeply chilling effect on the information available to people using Google. In essence, Google paid search would no longer be a viable means for building brands, but only for maintaining brands built on other platforms.

At the moment, Google has not provided any information about when this update will move beyond its initial testing to be available for everyone, or when it will be mandatory that ads adopt this new format. For now, this is simply something that marketers and regulatory professionals will need to stay abreast of.

It is also important to note that Google isn't synonymous with search, though it is the largest platform by a significant margin. Yahoo! and Bing remain very large players in this arena, and there's no reason to assume that Yahoo! and Bing will automatically adopt Google's changes. As a practical matter, this will probably mean having multiple sets of paid search campaigns going through the review and approval process.

Frequently, people refer to the process of requesting advisory comments from the Office of Prescription Drug Promotion (OPDP)* on draft promotional materials as getting "preclearance" of those materials. But that's just not accurate.

Technically, FDA never provides "clearance" of materials to use, unlike, for example, the Pharmaceutical Advertising Advisory Board (PAAB) in Canada. Instead, FDA will review and comment on promotional materials, but even assuming that all of the comments are addressed, it is still possible (though unlikely) to receive an enforcement action from the FDA for engaging in violative promotion, and there is no requirement to modify promotional materials to address FDA's comments (though of course failing to do so is generally unwise).

This was the situation until the Amarin settlement on March 8, 2016. For the most part, the final settlement simply codified the terms of the earlier injunction, so, most of my initial post on the topic still seems relevant. There was, though, one significant wrinkle.

In summary, the final settlement included the following provisions:

It's provisions 5 and 6 that are most interesting for regulatory professionals engaged in reviewing promotional materials.

Traditionally, the advisory comments process is used in the launch phase of promotion to receive feedback from FDA prior to initial promotional materials being released and for television advertising.

And the way that process works is that materials undergo review at the individual company, and then, after being fully vetted, a new submission goes to the FDA with all of the accompanying references. FDA asserts that its goal is have the review completed in 45 days, but often (especially of late), the review takes 60 days or longer.

FDA comments in response and will often point out alleged deficiencies in the draft materials. Because of the lengthy delay involved in submitting materials for review, companies rarely submit revised versions. Instead, they do their best to adjust the materials and then proceed to finalize them, and (assuming they qualify as product promotion) submit the finalized version to the FDA to meet the 2253 filing requirement.

The settlement establishes a new procedure. The first thing to note is that this procedure only applies to Amarin at the moment. So, whereas any company can submit any materials at any time via the traditional advisory comments, this new procedure is only available to Amarin.

This procedure is explicitly identified as a "preclearance procedure," so Amarin won't simply receive comments from FDA akin to the traditional advisory comments that companies are used to receiving. Instead, FDA will provide clearance to use the materials.

FDA will have 60 days to review the communications and present any concerns or objections to Amarin, after which, Amarin will have 45 days to respond, followed by 30 days for FDA to report any remaining objections.

If the two parties cannot reach agreement after this 135-day process, either party can request that the court step in to resolve the dispute, so there is a formal appeal built in and it goes directly to the court.

The chart below summarizes the key differences between the new "preclearance procedure" and standard advisory comments.

One final note is that the settlement explicitly states that this only lasts until December 31, 2020. One hopes that prior to then, this issue will have been resolved without a further series of one-off agreements and lawsuits.

* Note that although I focus on OPDP within CDER in this post, essentially the same points are true of APLB in CBER.
** This is an important but seldom-noticed qualification. Should the scientific underpinnings of the situation change, all bets are off.
Posted by PhillyCooke at Tuesday, April 05, 2016 No comments:

The Value of Virtual Communities

This is a virtual community open to DIA members, and there are monthly sessions with set topics. Today's call is slated for noon, and the announced topic is the 2015 enforcement activity from OPDP. I suspect, however, that the agenda might be hijacked by the settlement between Amarin and FDA that was announced last night.

I'm still reading up on the settlement and expect to add to my previous discussion of the issues raised in this legal challenge.

I wanted though to note how nice it is to be able to hop on a call while this topic is fresh and hear what others are saying. There's a vibrant community of ad-promo regulatory professionals, but we tend to be dispersed around the country, and any given company will rarely have more than 10 of us. So, being able to jump on a call and hear the perspective of others is fantastic.

If you aren't already a member of the DIA ad-promo group, I hope you'll join. Just hop over to the DIA communities page and select the link for the Regulatory Affairs A&P group.


* BTW, I hope to post a recap of the conference in the next few days. You can see my live Tweets on Twitter using the hashtag #MarketingPharma16
Posted by PhillyCooke at Wednesday, March 09, 2016 No comments: